I’ve been trudging along, trying to make time to finish reading Volume 1 of this 2-volume set. It is worth mentioning at this point that the break in the two volumes is a by-product of the editors, not of L. M. Montgomery herself.

For the purposes of this blog series, it should be understood that the text referenced below (The Complete Journals of Lucy Maud Montgomery, The PEI Years, 1889-1900) begins on September 21st, 1889 and ends on December 22nd, 1900.

As it’s been a few weeks since posting, I intend on trying to conclude this present volume in today’s post, so onward! 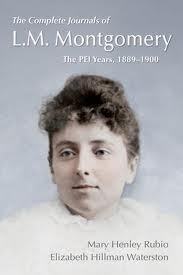 1897 was a cruel year for Maud as she struggled being a schoolteacher and a string of bad news brings heartache, and a “case of the blues” as Maud would put it, during a dark period of her life.

This was also the period that Maud has her first real passionate love affair and she treds the slippery slope of impropriety more than once. Without destroying the year with spoilers, I can best describe 1898 in Maud’s own words:

Oh ’98, how much I have suffered in you! How much of good and evil you have taught me, stern, cruel, relentless teacher that you were! (430)

1899 and Maud is back in Cavendish, living with her Grandmother and reflecting upon small-town life encapsulated in sewing circles and pie auctions (the evil things!). There are several lovely photos of Cavendish reflecting on the small church where she grew up (Maud wasn’t especially religious as I understand it), and newspaper clippings.

Finally, in 1900, the turning of the century, and some of my favorite entries of Maud’s are on the total eclipse (June) and the pleasures of reading — a joy unhampered by the tragedies in Maud’s past as delivered in these past four years.

A brief listing of her publication credits during this period:

In January 1897, The Ladies World published “On Haying Time” (poem) and two short stories were published in March 1897 by the Philadelphia Times and by Arthur’s Home Magazine. The latter would go on to publisher further stories in April and July of that year. The Times published multiple stories in March, May, June, August and September. You can see how prolific Maud has become!

She recognized this in herself, beginning a separate scrapbook in April, just of the bits of writing and publication dates she was accumulating for herself. At this point, Maud considered her writing to be a bit of mad money for spending/saving, not a real solid source of income, but she would later make nearly 100.00 in one year, almost as much as she’d managed to save in a year while being a schoolteacher — not too shabby I dare say!

In the footnotes, the scrapbook is mentioned as being entitled “Stories and Poems late 1890s” and includes sixty-nine items!  Good grief! Let’s just call her prolific and put an end to it… but no, we’re been faithful to record her bibliography thus far, so we continue:

October 1897, she had a poem accepted by Munsey, and this was the last I could find for the year.

In 1900, Maud takes time to note a special publication entitled “A Pair of Slippers” in Good Housekeeping, worthy of note for the bit of verse was illustrated and highlighted on its own page, the first honor of this sort. Maud would’ve been familiar with this practice in other magazines (e.g. The Youth’s Companion) but how delightful it must have been to see one’s own work so singled out!

The century’s exeunt ends with Maud Montgomery’s determination to make her way in the world by her writing.

I am getting on pretty well in a way. That is to say, I’m beginning to make a livable income for myself by my pen. Oh, outwardly I’m getting on all right. It is inwardly that all of the tumult is. […] This grumble has done me good. I work off all my revolutionary tendencies in this journal. If it were not for this “went” [edit: her word for venting] I might fly into a thousand little pieces someday. (469)

And with that thought, Maud’s journal closes, 484 pages (including the index) covering a decade of her life from her origins “as good as an orphan” to her maturity, jaded by love and heartbreak, and steely-minded looking towards making a way for herself by her writing. Where the next decade would take her, you need only read Volume Two to find out.

If you’ve been following along with this adventure of mine, thank you for reading!  At this point in my life, I am not going to embark upon volume two as life is getting a little hectic in my corner of the world, but please DO check it out for yourselves and let me know what you think of it.