If thoughts were flowers, then beautiful thoughts would produce a garden of flowers. This is a paraphrase of a sentiment commonly misattributed to Alfred, Lord Tennyson. The idea is a lovely one though, in keeping with the admonition in Philippians 4:8 on how our thought lives ought to be.

If a well-kept garden is beautiful, that surely an unkempt garden will have its thorns. Jesus addresses this in the parable from Luke 8:4-15 (Amplified Version):

4 When a large crowd was gathering together, and people from city after city were coming to Him, He spoke [to them] using a parable: 5 “The sower went out to sow his seed; and as he sowed, some fell beside the road and it was trampled underfoot, and the birds of the sky ate it up. 6 And some seed fell on [shallow soil covering] the rocks, and as soon as it sprouted, it withered away, because it had no moisture. 7 Other seed fell among the thorns, and the thorns grew up with it and choked it out. 8 And some fell into good soil, and grew up and produced a crop a hundred times as great.” As He said these things, He called out, “He who has ears to hear, let him hear and heed My words.”

9 Now His disciples began asking Him what this parable meant. 10 And He said, “To you [who have been chosen] it has been granted to know and recognize the a]”>[a]mysteries of the kingdom of God, but to the rest it is in parables, so that though seeing they may not see, and hearing they may not understand.

11 “Now [the meaning of] the parable is this: The seed is the word of God [concerning eternal salvation]. 12 Those beside the road are the people who have heard; then the devil comes and takes the message [of God] away from their hearts, so that they will not believe [in Me as the Messiah] and be saved. 13 Those on the rocky soil are the people who, when they hear, receive and welcome the word with joy; but these have no firmly grounded root. They believe for a while, and in time of trial and temptation they fall away [from Me and abandon their faith]. 14 The seed which fell among the thorns, these are the ones who have heard, but as they go on their way they are suffocated with the anxieties and riches and pleasures of this life, and they bring no fruit to maturity. 15 But as for that seed in the good soil, these are the ones who have heard the word with a good and noble heart, and hold on to it tightly, and bear fruit with patience. 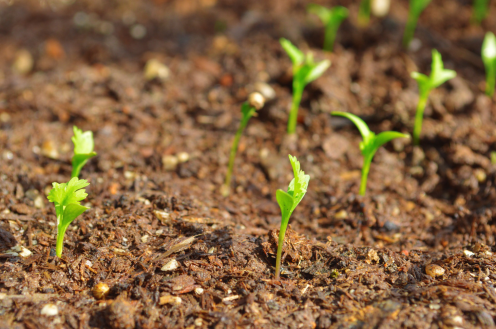 It seems fitting that Jesus uses the parable of a garden when mankind’s earliest origins began in a garden.

One of my favorite stories is about the transformation of a little girl in the care and restoration of a forgotten garden. I think that our hearts and minds are a kind of garden, constantly changing in the seasons of life and the soil which the Word of God falls upon.

For the purposes of this post, thorns represent the cares, fears and anxieties of the heart that choke out the Word of God and prevent us all from maturing. It’s crucial, I think, to not only recognize that there are thorns in the gardens of our mind, but to give them a name.

So what are thorns that might be in your garden?

The lies we tell ourselves.

The lies others tell us about ourselves that we believe.

The hard truths about ourselves that we ignore.

Longstanding suffering from an illness

Give me time, and I’m sure that I could drum up a legion of lies in my own life to share, but, if you think about it, you could probably contribute a few from your own experience. Sometimes, as in the case of Paul, some thorns are allowed by God for the purposes of keeping us reliant on Him, and in those instances, that’s where serenity comes in, but for most, I think, it’s a matter of rooting out the weeds and thorny falsehoods from our minds and hearts and allowing room for God to plant something wonderful instead.

What are you planting in your garden?

Lauren Miller lives in Missouri where she dabbles in mountain dulcimer playing, photography, and occasionally, blogging. View all posts by Lauren Miller