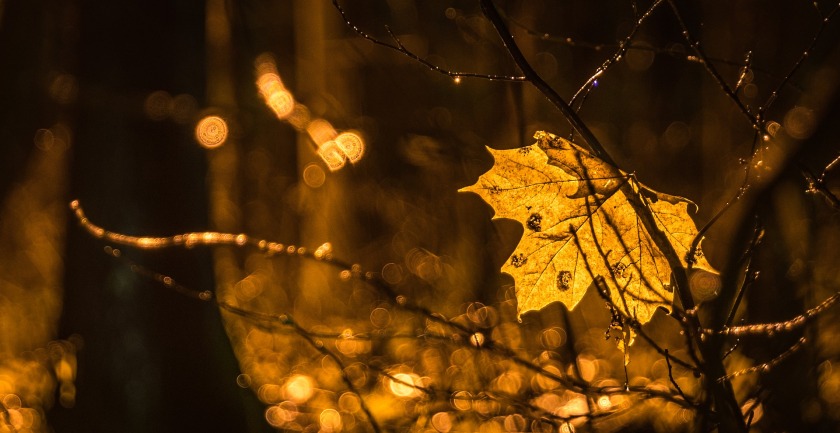 “Let go.” For two small words, they sure pack a lot of meaning. To let go implies that we’ve obtained something and that we are actively holding on to it, with a fierce grip, determined. To let go requires our free will to cease the act of holding, to release, to let something be no longer in our thrall of control. To let go implies that there is a danger present, that once a thing is loosened, it may not return to us.

I’m thinking of various examples over the years where I’ve heard the phrase, “let go” and the versatility of its application.

The earliest memory I have of hearing these words, and perhaps also for you, was of two siblings or friends fighting over the same thing. Maybe a cookie or a toy. In my case, I remember fighting over the wishbone in a turkey one Thanksgiving with someone else my own age (a cousin, probably). We each wanted the other to ‘let go’ first, confident that we’d come away with the larger bit of wishbone and our wish would be guaranteed its future success. To let go first meant that we would likely suffer loss, as I’d been counselled by an uncle beforehand. But eventually, someone has to let go.

Then there’s that scary “letting go” that accompanies an adventure, like the time you first tried out that swing set and you’re preparing to leap off into the unknown. You’ve been pushed for a good head start, you’ve pumped your legs, you’re arcing through the air and there’s that hesitation, that moment of uncertainty of whether you should indeed, let go of the chains, and then you do and you’re sailing through the air to fall (hopefully) unharmed on a soft lawn. This type of loss includes emotions of doubt and of the unknown.

Watching movies as a teenager, I remember that pivotal moment in Indiana Jones and the Last Crusade, when Indiana Jones urges Elsa to give him her other hand. But the decision to do so, although it will ensure her own safety, means letting go of her quest, to reach the holy grail which is almost within reach. And when Indiana is struck by the same urge, we hear Dr. Jones (Sean Connery) saying, “Indiana, let it go.” Letting go, in this case, meant letting go of the object, the final reward, of his epic quest, of his father’s lifelong quest. Forever. This type of loss of is one of professional ambition, the same we experience when a job doesn’t work out the way we’d intended to, and we are ‘let go’ — there’s those two powerful little words again that pack a painful punch.

As a young adult with a tender, eager heart, I had my first painful breakup and I cried and wailed and clung to that relationship, even though (in hindsight) it wasn’t God’s best for either of us. I had trouble with accepting this because it implied that I’d failed, that letting go meant acknowledging that there was something beyond my fixing. That giving myself to that relationship hadn’t paid off the way it was supposed to. Only God, and time, could repair the damage my refusal to let go caused, and delaying that decision to begin letting go plunged me into a depression that lasted over two years. Besides the psychological toll, it had a physical toll on my body too, and I gained over fifty pounds during those two years.

This type of pain, relationship-related, is eclipsed only (in my mind) by what one experiences with the death of someone you loved, and then ‘letting go’ is part of a long grieving process of denial, anger, isolation,  depression, and finally, acceptance, when we’ve learned to let go and move on.

They are words that convey a sense of loss, of uncertainty, of doubt, of release. Rarely of hope.

My Recent Struggle with Letting Go

Over the past three or four years, I’ve been returning to some old habits that have proven not to be healthy for me. Sure, they have their external benefits (for a while), that adrenalin rush, the exhilaration of a sense of purpose and a common goal that you share with others, while engaging in a shared activity.

There was also the unexpected blessing of the beloved friendships you’ve build from those mutual experiences that (you hope) will last a lifetime, over the life changes that inevitably follow — a new job, a new city, a new hobby, etc. And sometimes they do, but more often, the roots of those friendships fail to survive the transplanting. Then, when it doesn’t, it can be like grieving for the death of a loved one.

I’ve been struggling with the acceptance of the death of some friendships, and the need to ‘let go’ of those old relationships that appear not to have lasted the transition. It’s been difficult.

While the psychological struggle to quit a habit (like smoking or drinking) can be conquered, and there are certainly support groups available, rarely do I hear anyone talk about the mental anguish and loss of close friends. It can feel like the death of a loved one. In the example to which I am referring, more like the death of several persons, and unexpectedly, the psychological pain of quitting is like a flash of bright sunlight through a rearview mirror compared to the supernova of grief, denial, isolation, depression, and eventually, acceptance, that you’ve lost more than you realized.

Suffering and the Cross

But suffering shouldn’t be such a foreign concept to Western Christians. God never promised us an easy ride. On our own Via Dolorosa, as we journey to death, and ultimately, our resurrection through Christ, we are called to experience the same suffering as Our Lord. Sometimes, the suffering is from without, like the disease that attacks our bodies, or from the culture that ravages our souls. Sometimes, it is suffering induced by our poor life decisions. And sometimes, as the Bible tells us, God will refine us as by fire.

I’ve found that meditating on the mysteries of the Rosary, particularly the Sorrowful mysteries, helps me to correctly view my suffering in the light of eternity, by mulling over the struggles of Our Lord. I am not greater than my master. Anything I count as loss for the sake of pursing Christ is gain. And He never fails us. In fact, sometimes, rare times, letting go can even be a gift.

The Gift of Letting Go 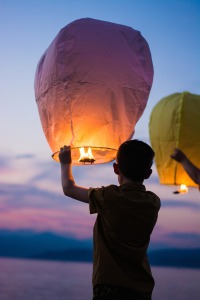 The photograph I’ve chosen on the left is that of a child holding an air lantern, on the precipice of letting go. Once he does, the hot air from the flame within will bear the lantern aloft where it will join others in the sky. Someday, I’d like to see one of these lantern festivals in person — I’ve heard of their extraordinary beauty and otherworldly presence. And there are participants in that experience, the ones willing to let go.

Its an imperfect metaphor, but, I like to think that if we view God as the flame, the Light within the lantern, then when we are willing to let go of ourselves — our past mistakes, our poor choices, the life and aspect of our soul that keeps us tethered to the world — when we let go and trust God fully (always in the creche of the Cross), then we will be carried aloft like the lanterns. Our souls will shine as they reflect the love and light of Christ to a watching, expectant world. So the question is, how much do you want to hang on to whatever you’re clinging to so tightly…or are you willing to try and let go? 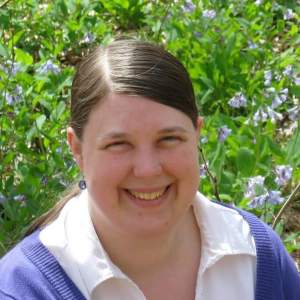