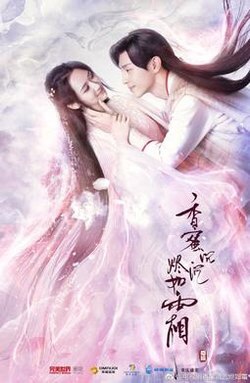 Ashes of Love, Ashes of Love. Oh, this was ever such a nice surprise! Looking for a palette cleanser after Meteor Garden, I stumbled onto this fantasy series about an immortal romance for the ages, a romantic comedy with plenty of drama mixed in for good measure. This series is based on the novel, Heavy Sweetness, Ash-Like Frost by Dian Xian, which I need to read at some point. If you haven’t yet noticed, I’m not exactly a stickler for reading the book before the film version.

Little Jin Mi (Zi Yang), is a humble grape fairy and she lives in the floral realm under the guardianship of Chief Peony (Peng Yang), who is the defacto ruler after the tragic death of the floral goddess, Zifen (Zhang Yanyan) whom is regularly mourned and honored, centuries after her death. Jin Mi, who has no concept of what love is, has one goal in life — to restore her friend to life, who was cruelly transformed prior to death into a plant. Jin Mi believes that if she can get enough magic, or find someone powerful enough to help her, she can get her best friend back. The only one powerful enough who perhaps could help her is the Heavenly Emperor, ruler over all of the realms. But she’s forbidden to leave the floral realm, so it seems impossible.

When a crow breaks through the protective barrier of the floral realm and transforms into a male immortal from the heavenly realm, Jin Mi demands to be taken there as reward for saving his life so she can appeal to the Heavenly Emperor for help. She doesn’t realize that this immortal is in fact Xu Feng “aka Phoenix” (Deng Lun), the son of the Heavenly Emperor, and brother to Run Yu (Luo Yunxi), the Night god. Like Dorothy traveling to the Emerald City to appeal to the Wizard, this decision launches Jin Mi into a journey fraught with danger, romance, and lots of magic.

The writing was really well done on this one and although it had a bit of a slow start, once I got into it, I was hooked. I was probably averaging several episodes a day, every day, until it was finished, and I forget offhand but I think there was something like 60 episodes in the series altogether. It. Never. Ended.

Until it did. And then, there was wailing and gnashing of teeth (just kidding…). But in all seriousness, this was amazing. There are other Chinese fantasy romances out there on Netflix right now, but I’ve hesitated watching any of them for fear that they’ll pale in comparison. It’s that good.

I haven’t really touched upon the romantic storylines or the points of the central conflict in the series because I really don’t want to give anything away but if you’ve had a chance to see this series, let me know what you thought of it by leaving a comment below. And if you know of any other series in this vein that measures up, please make recommendations! I’m always looking for the next bingeworthy series. Thank you for reading and remember, keep reaching higher.